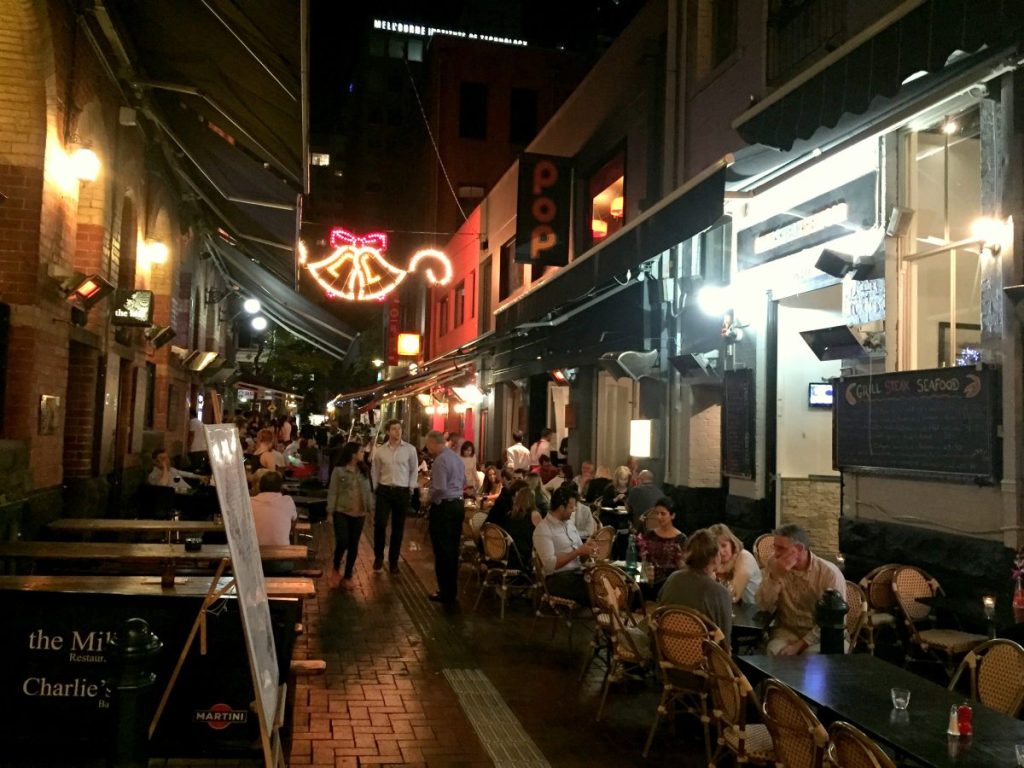 Located in Hardware Lane, one of Melbourne CBD’s hotspots, Vons Restaurant and Bar serves a fusion or medley of modern Australian and Meditteranean cuisine.

Shopping in the vicinity, we stepped into the very busy Hardware lane at about 7.00pm in search of a good dinner. There are plenty of little cafes, restaurants and bars along this lane and we snaked our way through hoping some place would catch our attention.

We were suddenly stopped in front of Vons by a middle aged man (presumably, one of the owners?) who promised us the most delicious bowl of pasta. He even offered special kid-sized meals, noticing the kiddos with us. And that’s how we came to eat at Vons!

Vons shares the same ambience that you find in most of the city restaurants located in such busy lanes. There is a hub of activity, conversations, glasses clinking, laughter and merriment. Not the place for a silent, romantic dinner! But I love this bustling energy and Vons appealed to me.

The seating space inside is decent and there is an al-fresco area which is likely to be crowded always. If you are aiming for the al-fresco space, then a wait might be necessary though you are likely to find an empty table or two inside at most times.

The first thing that struck me on entering is the beautifully stocked and done up bar. Loved the bottles of preserves lining the shelves along with the wines and alcohol. The hostess was prompt, cheerful and with a smile at all times. Lovely service….

So far, so good…and with the promise of a good meal ahead, we began browsing the menus.

For drinks, my husband ordered the classic margarita and I ordered Zeppelin Riesling (Eden Valley, SA) which the waitress recommended would go with the seafood main that I had in mind. And true to the promise, the wine paired beautifully with the meal. The margarita was not enjoyed much; he felt that it lacked the classic refreshing flavour and punch of a real margarita.

For starters at Vons, we chose the Chermoula chicken kebabs. Disappointing…the kebabs were under seasoned and there was no real chermoula flavour. Totally lackluster!

For my son, I ordered a Penne with chorizo and Napoli sauce. The flavours were just average; the pasta was cooked perfectly but the sauce lacked punch. It was just an average Napoli sauce and not the best bowl of pasta I was promised!

I ordered a pan seared snapper fillet with risotto porcini and creamy orange sauce for mains. The best dish of the day at Vons, in comparison to others. The snapper was cooked perfectly, just flaking over the delicious orange sauce. The risotto had a good porcini flavour and was enjoyable but I would have preferred it to be slightly creamier.

The next main we ordered was the Osso Bucco; one that we all eagerly awaited. But this one turned out to be the biggest disappointment of the day. The meat was not cooked enough, under seasoned and the sauce that accompanied was so plain and bland. There was absolutely no flavour in the dish, thoroughly dissatisfied.

The next dish we ordered at Vons was the risotto porcini with smoked duck. The same risotto served with the snapper and a few pieces of smoked duck on top. While the risotto was enjoyable, the smoked duck lacked seasoning and did nothing to add to the dish.

The final dish for the evening was the smoky lamb ribs. The ribs were soft, falling off the bone and seasoned well. The sauce was good but definitely lacked the smoky flavour or deep richness that you would normally expect from a dish like this.

Didn’t bother with desserts as we were all pretty much disappointed by the end of the meal at Vons. The service was really good but the food as such, quite disappointing. Though prices were affordable, considering the quality, I would say on the higher side especially for a family. Don’t think I will be going back, unless by chance.