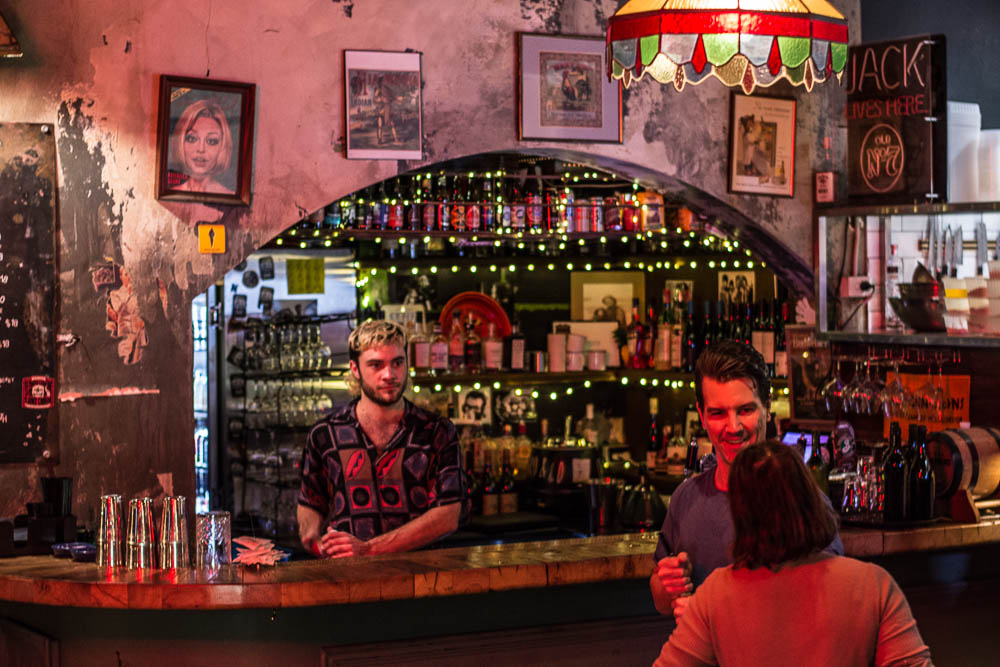 Kerala cuisine in a modern Australian pub!
Surprised? I am…..
I constantly crib about how poorly Indian cuisine is represented in Melbourne with just a handful of restaurants that serve decent fare. And also none when it comes to South Indian food except for plenty of dosa serving restos that are often a disappointment.
So the new South Indian menu at The Rochey came as a huge surprise.
The Rochey has been an iconic part of Fitzroy for many years now but recently went through a whole revamp in terms of food and drink, both of which has been taken up several notches. Mischa Tropp from ‘WeareKerala’ has designed the new menu which showcases regional Kerala cuisine at its best, with some snippets from the Goan cuisine too.
The ambience at Rochey is typical Fitzroy (the architecture is so unique there), retro with contemporary influences but also with the industrial touch that the suburb does so well. While the front portion is the dedicated pub space, there is a cozy dining area towards the back. There is also a beer garden and a party space if you are looking to hold events. 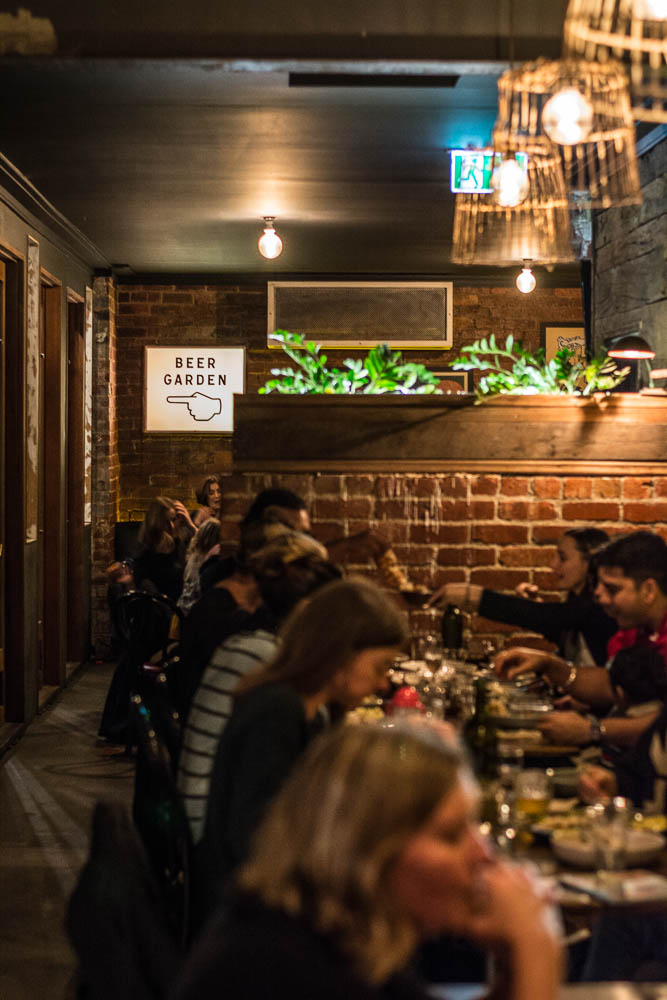 The new drinks menu at Rochey deserves mention too. There are the classics given that it’s a pub, but there are also some interesting cocktails and new wines, beers etc…. on the list, some of which are specifically included keeping in mind the flavours of the new menu.
I was fortunate to try out a couple of wines that were exceptional and paired extremely well with the flavour profiles of the new South Indian menu.
(I have outlined the specifics of each wine beneath the photographs) 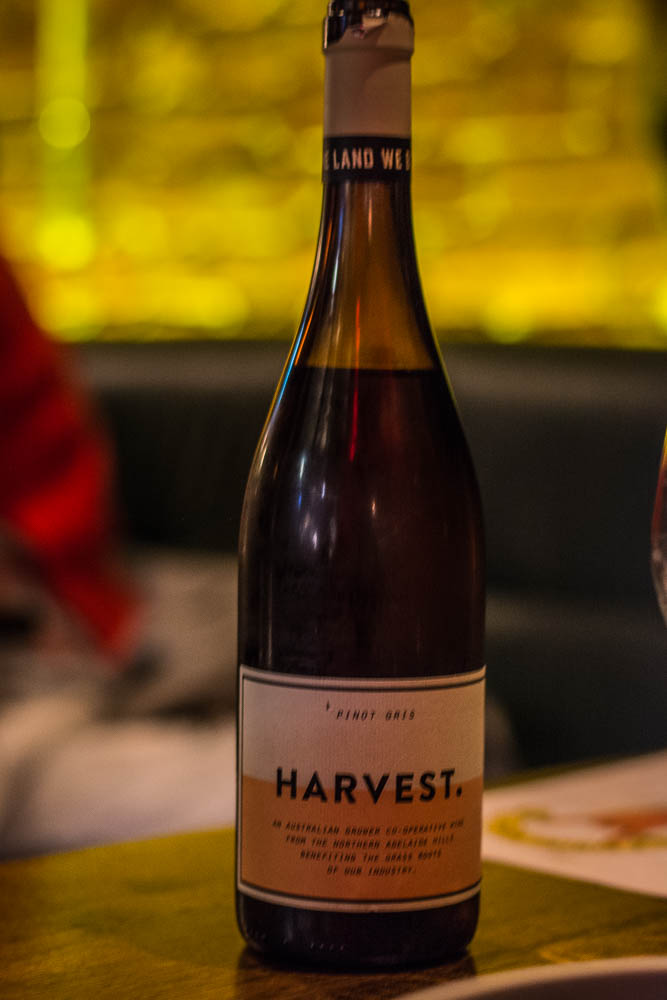 Harvest Pinot Gris (2017 / Adelaide Hills SA / Organic) – Produced by a Grower’s Cooperative with a strong sense of giving back to the community, this Pinot Gris is easy on the palate, luscious with generous guava, lemongrass and white tea aromatics. 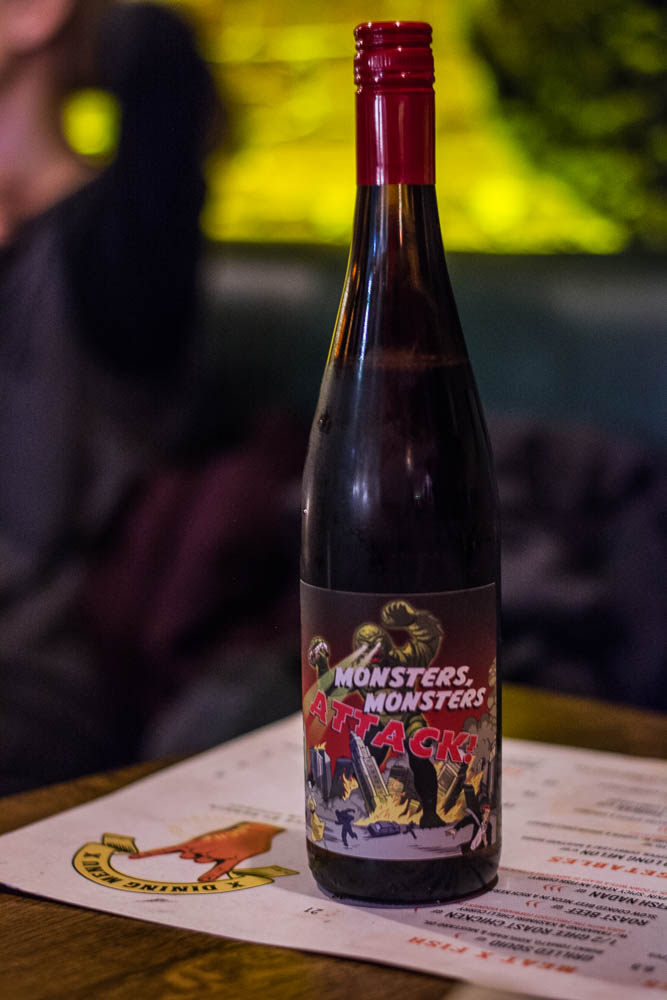 Some Young Punks ‘Monsters, Monsters Attack!’ Riesling (2015 / Clare Valley, SA) – Highly recommended if you are going to try out the fiery fish curry on the menu. A really sweet Riesling with racing acidity and brilliant florals, it is a treat after your tastebuds have been attacked from all the spices. 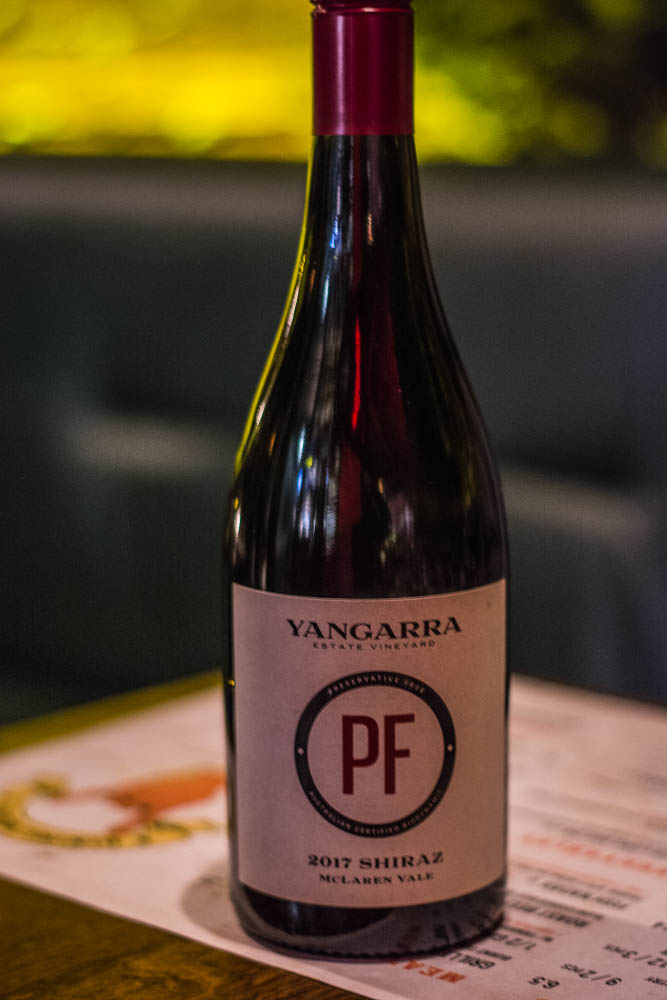 Yangarra Estate PF Shiraz (2017 / McLaren Vale, SA / biodynamic / preservative free) – Made without additives of any kind, this Shiraz is a treat for the palate. Fresh, medium bodied yet vibrant, it’s an easy one that can be enjoyed young.

The food menu, as I mentioned, is largely based on the cuisine of Kerala. But there are also dishes from the Goan cuisine. And it’s a classic example of old meets new. While some dishes are traditional, staying true to the roots, others are a modern interpretation of the flavours of Kerala and Goa.
(As with the drinks, all the details of the dish will be outlined under each photograph) 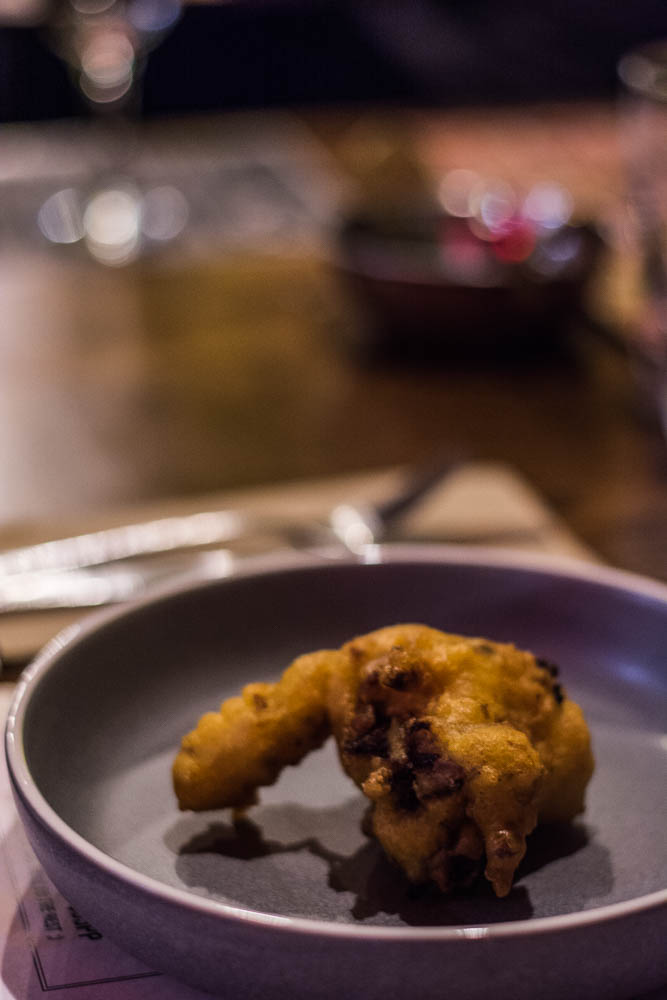 Egg Bonda (boiled egg & onion masala fried in a sourdough batter) – a classic tea time snack from Kerala. Traditionally a chickpea based batter is used but here, a sourdough batter has been used. The flavour was good especially from the caramelized onion masala used in the stuffing. But I would have preferred some sort of chutney or dip to go alongside the bondas. And if you have children with you, they are gonna love it. 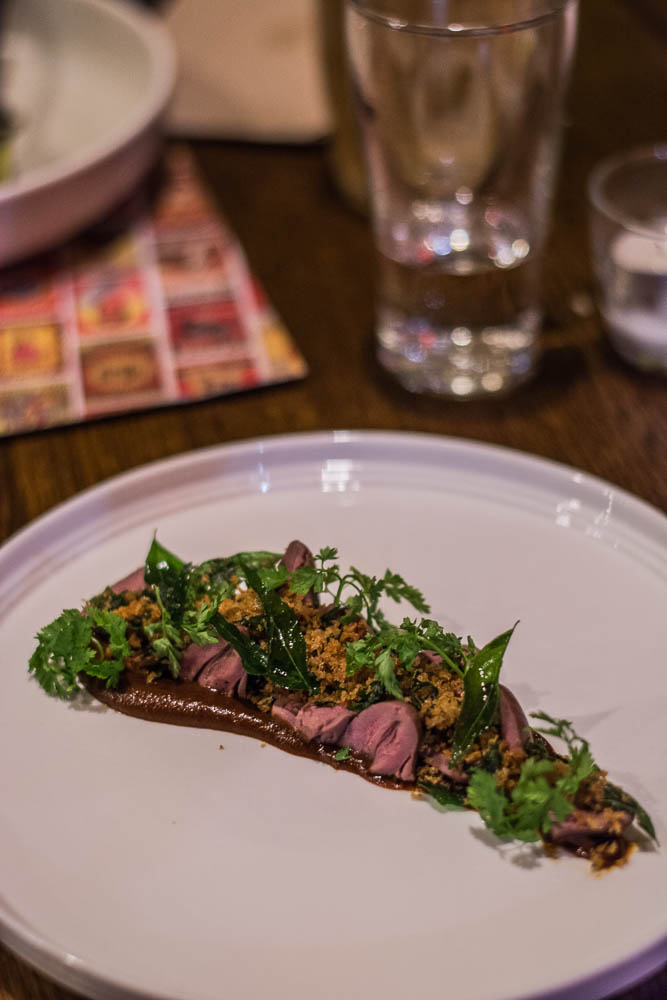 Duck Hearts ( Chargrilled with Recheado and a sweet and sour spicy sauce) – One of the highlight dishes of the day for me. Absolutely loved the flavours, that perfect blend of sweet, sour, spicy; absolutely divine. And highly recommended. 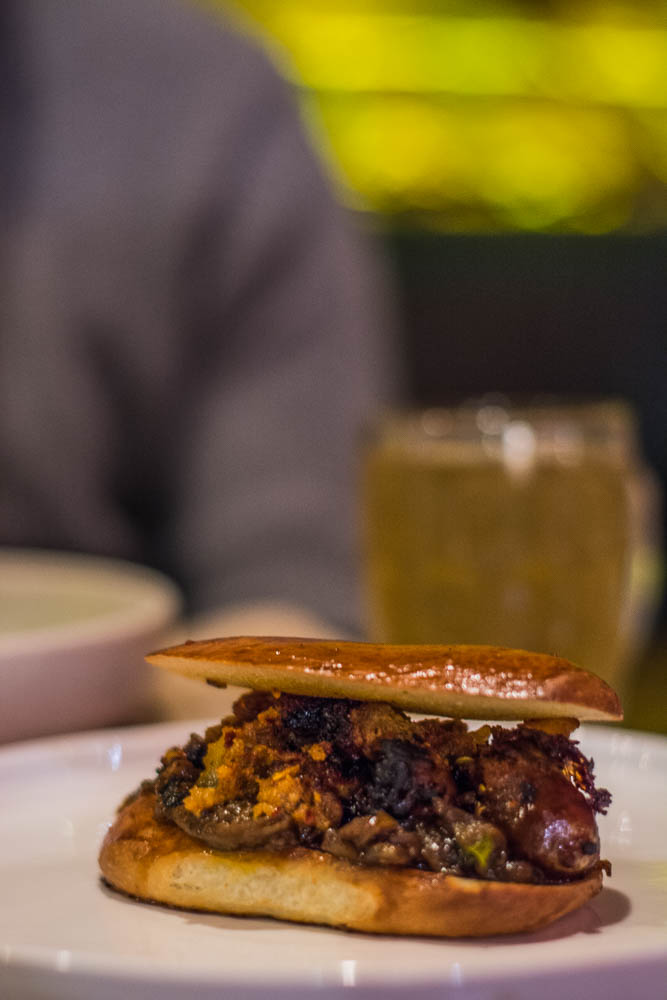 Choris (Goan Chorizo with Onion Masala) – A twist on the Goan classic. A great snack if you are dropping in just for a drink or an excellent starter to start your meal. Another one the kids are gonna love. 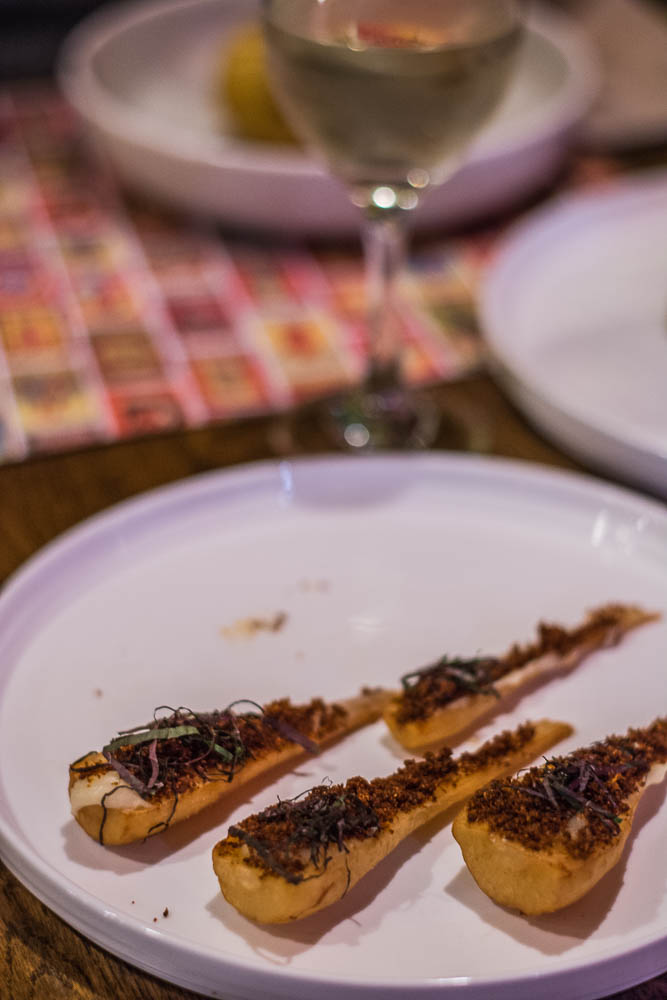 Confit Parsnips (with Kashmiri Chilli Crumb and Shiso) – perhaps the dish that intrigued me the most on the menu which is why I had to try it. It’s unlike anything I have eaten before yet feels so familiar. For those who are familiar with the classic combination of tapioca and spicy dry coconut powder that is a staple in Kerala might be able to draw references to this one. And I totally loved the ingenuity of this one.

For the mains, it’s best to get an assortment of dishes and share which is the best way to enjoy regional Indian cuisine. We ordered a selection of vegetarian and non vegetarian dishes; also got rice, flaky bread and pappadoms to accompany. Quite chuffed the traditional red rice (Rose Mata) was served instead of the regular white rice; has a different texture and so much healthier than the white. The flaky bread or parotta as called in Kerala is a delightfully flaky creation that’s perfect to mop up the curries.

Girija’s Cabbage Thoran (Stir fried cabbage, coconut and curry leaves) – a classic vegetarian dish from Kerala. If you have looked at my blog before, you would know how much I love thoran and all the incredible dishes that can be made from the basic style. The cabbage thoran is perhaps the most common rendition and in my opinion, the most delicious way to eat cabbage. A must try! 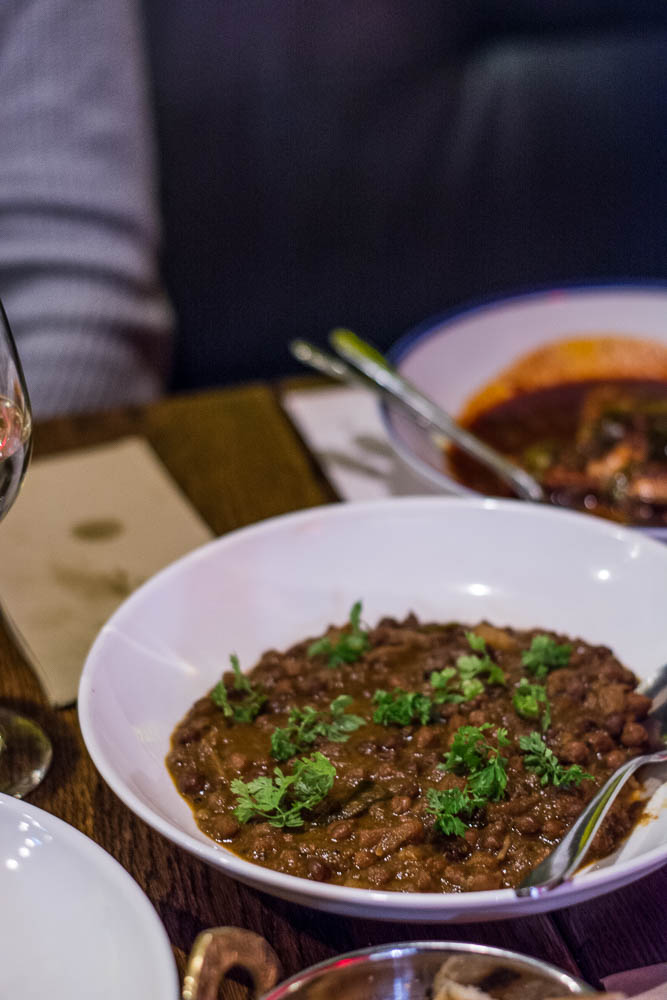 Kadala (Brown chickpeas with roasted spices and coconut) – Another classic (you are going to hear that word a lot!). This curry that is just resplendent with spices and coconut makes it extremely loved in Kerala and beyond. Again done to perfection and as authentic as it can get. I would have loved to have some appams on the menu which pairs best but the flat breads are equally good too.

Roast Beef (Slow cooked beef neck in a rich Kerala style gravy) – Now where do I even start with how much this dish means to me. I was ready to be super critical of this one, but all that I can say is that Mischa and his team has done a fabulous job with this. Absolutely tender beef cooked in that classic aromatic spicy gravy that’s so unique to Kerala cuisine. 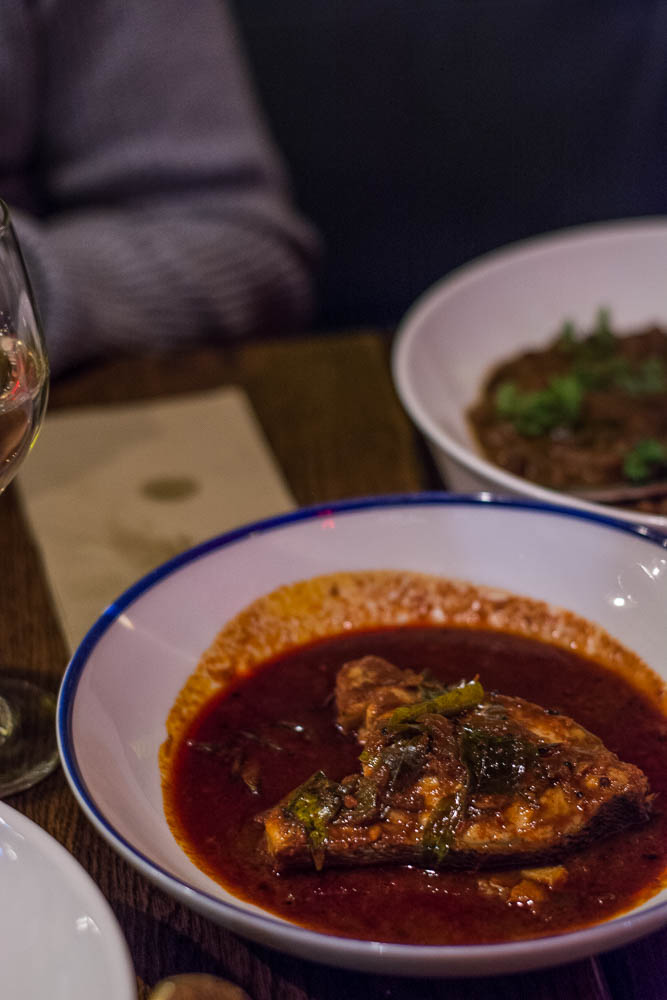 Fish Nadan (Freakin Spicy Keralan fish curry) – Yes guys, this is freaking spicy and not for the faint hearted. Even with the hardcore spice eating Indians, this dish stands out for its heat. But don’t let that prevent you for trying it out because it’s sensational and unlike any other fish curry you have ever eaten before. And pair it with the Monsters Attack Riesling that I mentioned above; it’s a match made in heaven.

To summarize, it’s the best Keralan food that I have eaten at a restaurant in Melbourne. Enough said!
Rochester Hotel aka ‘The Rochey’
202 Johnston St
Fitzroy, Vic, 3065
Phone no: 03 9419 0166
Website: http://rochey.com.au/
Timings:
Mon-Thu: 2pm– late
Fri-Sat: 12pm–3am
Sun: 12pm–11pm
Disclaimer – I dined as a guest at The Rochey, but all the opinions expressed are entirely mine.