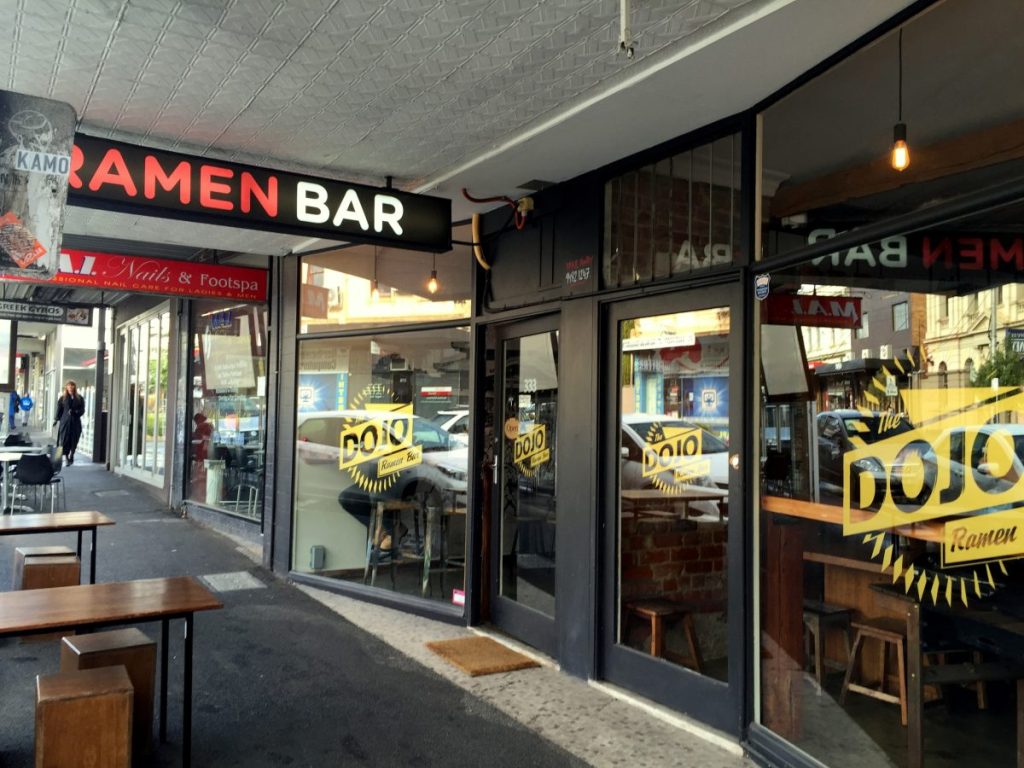 Northcote is one of the foodie suburbs of Melbourne with a distinct sense of character and plenty of restaurants to choose from.

We were out shopping for a new camera in Northcote and that’s how we ended up at The Dojo Ramen Bar. Like I have said before, I do not read reviews of most restaurants I walk into. This is my way of keeping an open mind and not get influenced by what I have read. Not an exercise you should indulge in if you are not adventurous like I am.

The Dojo Ramen Bar has an unassuming exterior and is one of the several Asian restaurants that line High Street. Now, I don’t enjoy Japanese cuisine unless it is done well. So it is with a bit of trepidation that we entered the place.

Once inside, I could feel my nerves calming down. It was not crowded for a busy weekday afternoon but the ambience was warm and inviting and I noticed that the few people inside were quite engrossed in their food. A good sign so far….

The Dojo Ramen has a contemporary interior; modern meets traditional Japanese. There were plenty of Japanese animation figurines lining every nook and corner of the resto but done tastefully without being intrusive. The walls were covered with scenes from Japanese history and blended in well to the modern yet rustic ambience of the place.

The waitress seated us immediately and bought over the menus.

For drinks, both of us decided to go the sake route. Dojo Ramen Bar has a good collection of Japanese craft beers; the place even has a small area designated as the beer garden exclusively for the beverage lovers. But for us, it was sake….. While S decided on a glass of warm Dojo sake, I decided to try out the new Dojo sake punch, refreshing sake cocktail with mixed berries and lemonade punch.

While ordering the sake, S was asked if he preferred it warm or cold; he asked for the opinion of the waitress who encouraged to try the warm especially given that it was a cold afternoon. A suggestion S was willing to try and quite happy with the result too.

Same goes for the sake punch, it was refreshing and a delightful companion to the meal.

Then came the Cheesey rolls, deep fried cheese spring rolls with a dipping sauce. The first thought that I had was, ‘these are so small’ but this was quickly forgotten as the rolls were delicious and very moreish. Totally recommended especially if you have little children with you….

The next dish we ordered at Dojo Ramen Bar was the Japanese fried chicken or the Karaage chicken with a miso mayo dipping sauce. The quantity issue bothered me; I felt the price was slightly on the expensive side when compared to the quantity. But the chicken was spot on; fried to perfection, juicy and succulent inside. The dipping sauce with its salty miso taste paired beautifully with the chicken

The final starter was the tempura prawns which disappointed me a bit. I make quite a good tempura myself so was disappointed that it did not match my expectations in a Japanese restaurant. The batter seemed fine but there was no flavour, it tasted a bit bland even with the dipping sauce.

Finally, it was time for the ramen. We ordered the Chilli Miso ramen; Miso tare with chilli mixed with The Dojo broth and topped with cha shu pork, ajitama egg, spring onion, nori seaweed and bamboo shots. Good quantity but just enough for one person without the starters. The broth was delicious, especially mentioning the pork and ajitama egg. Got an extra egg which at $2 for half an egg was a bit pricey. But the ramen at Dojo Ramen Bar is totally recommended.

Overall, a good experience. Though I do feel the food was a little pricey at Dojo Ramen Bar when compared to the quantity, I will still visit this place again for the ramen. It was indeed a fulfilling experience.