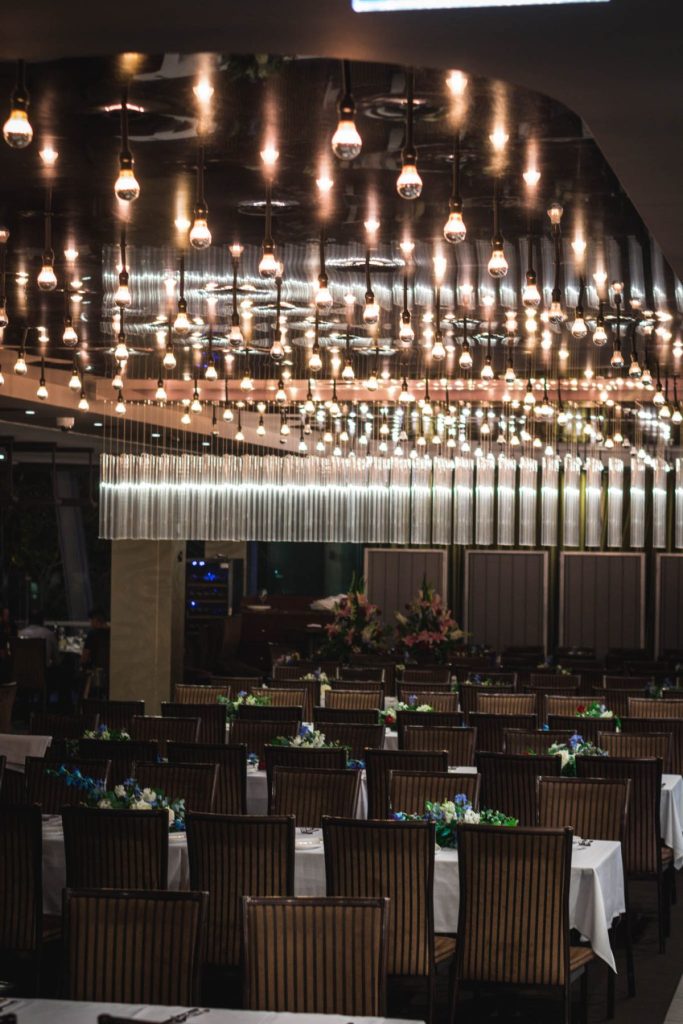 Manjits @ The Wharf was one of the shortlisted restaurants when we were planning our road trip to Sydney late last year. This has been a place I had heard much about and I was excited to have my first experience of Indian food in Sydney.

We particularly chose The Wharf location, for its ambience. Unfortunately for us, it was an unusually windy night so couldn’t be seated outside overlooking the harbour. But nevertheless, the views from the windows too were spectacular.

There’s a quiet elegance to the décor with pops of colour and Indian artefacts peppered around the restaurant. With plenty of seating and given its location, Manjits @ The Wharf is a must sought out spot for events and special occasions.

The menu at Manjits is described as fusion Indian, but except for some of the dish names and presentation, I couldn’t really see any innovation or fusion especially with the dishes we ordered. Again the menu largely showcases the food of Northern parts of India; with very few from the Southern or Eastern regions.

The drinks menu is extensive with a good selection of wines, whiskies, liqueurs, cocktails and mocktails. A fair bit of fusion here especially with the cocktails.

For drinks, we got two cocktails, The Smoking Nepali and Calcutta Caipiroska. Both were slightly disappointing in the sense that it tasted like mocktails. The overall flavour was good but with both drinks, it felt as if the alcohol bit was forgotten and we just got flavoured iced drinks. We also got Shikanji, an Indian mocktail which was really delicious. Since the cocktails were a disappointment, we ordered a smaller bottle of Yering Station 2016 Pinot Noir, a safer option than another round of cocktails.

We started the meal with Gol Gol Gappas. The puris were small but thin and crispy with a delicious filling and the paani served in shot glasses. Quite delicious.

Also ordered the Stuffed Idli (with vegetables) and served with tomato rasam and coconut chutney. While it sounded very exciting on the menu, the balance of flavours was a bit off as the rasam was a tad bit sour. The idlis were average, the only saving grace being the chutney.

Another starter we ordered was the Jhinga Tandoori. The king size prawns were delicious, cooked well and the flavour from the tandoori masala was fabulous. Served with the prawn heads, which I really enjoyed.

For mains, we ordered three dishes that were paired with garlic naan, steamed rice and the four flavoured chakra (mango chutney, mixed pickle, yoghurt and cucumber raita and tamarind sauce).

Bhindi masala – A Punjabi style okra dish and one of my favourite veggie dishes. The flavours were really good but some of the okra pieces were fibrous in texture while others were soft and tender. Fibrous okra is not very appetizing though.

Machli Tamaterwalli – Again an average dish; the fish was served as a single large piece, shallow fried and placed on top of a tomato based gravy. While the individual components were fine, the problem was the fish and gravy seemed to have nothing to do with each other remaining separate entities.

Bakra Roganjosh – The most enjoyable dish of the evening. Not a traditional Kashmiri Roganjosh, but the lamb was prepared well, tender, the gravy was delicious and perfect with the garlic naans. A dish I would recommend.

We ended the meal with Rasmalai, the traditional Indian milk dumpling soaked in a saffron and cardamom milk reduction and served with ground pistachio. Not the best Rasmalai I have eaten, but it was really delicious with the flavours well balanced.

To summarise, dining at Manjits was an enjoyable experience but not worth the hype. The views are spectacular and offer one-of-a-kind dining experience but for great Indian food, it is not a place I would go back to.