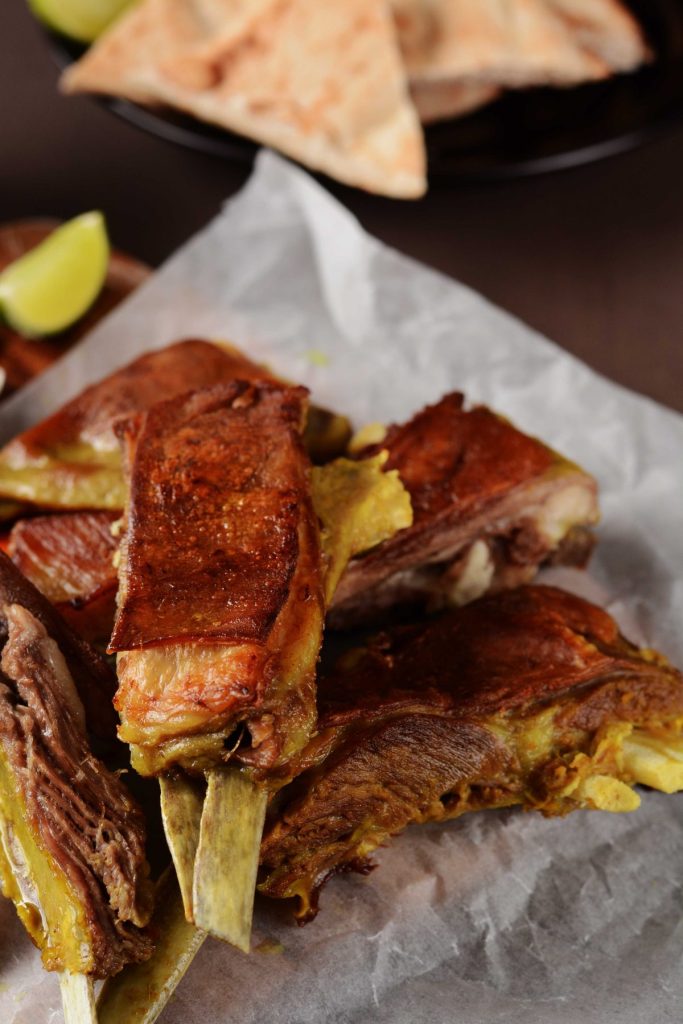 Kashmir – a mysterious, beautiful land that always evokes a deep sense of calmness and peace within me.
Ironic, isn’t it…especially given its turbulent geo-political issues. I have never visited Kashmir except through the thousands of breathtaking photographs of the place but everytime I think of the land, it’s ‘Garden of Eden’ that I remember. And everytime I visualize Adam and Eve eating that apple, its pictures of Kashmir that flash through my mind.

Travelling through Kashmir remains one of the top wishes on my bucket list, and particularly visiting the saffron fields and picking out the flowers; I want to experience that at least once in my life. Though today’s dish has nothing to do with saffron, it has all to do with the cuisine of the region. Tabakh Maaz or Kashmiri style Lamb Ribs! 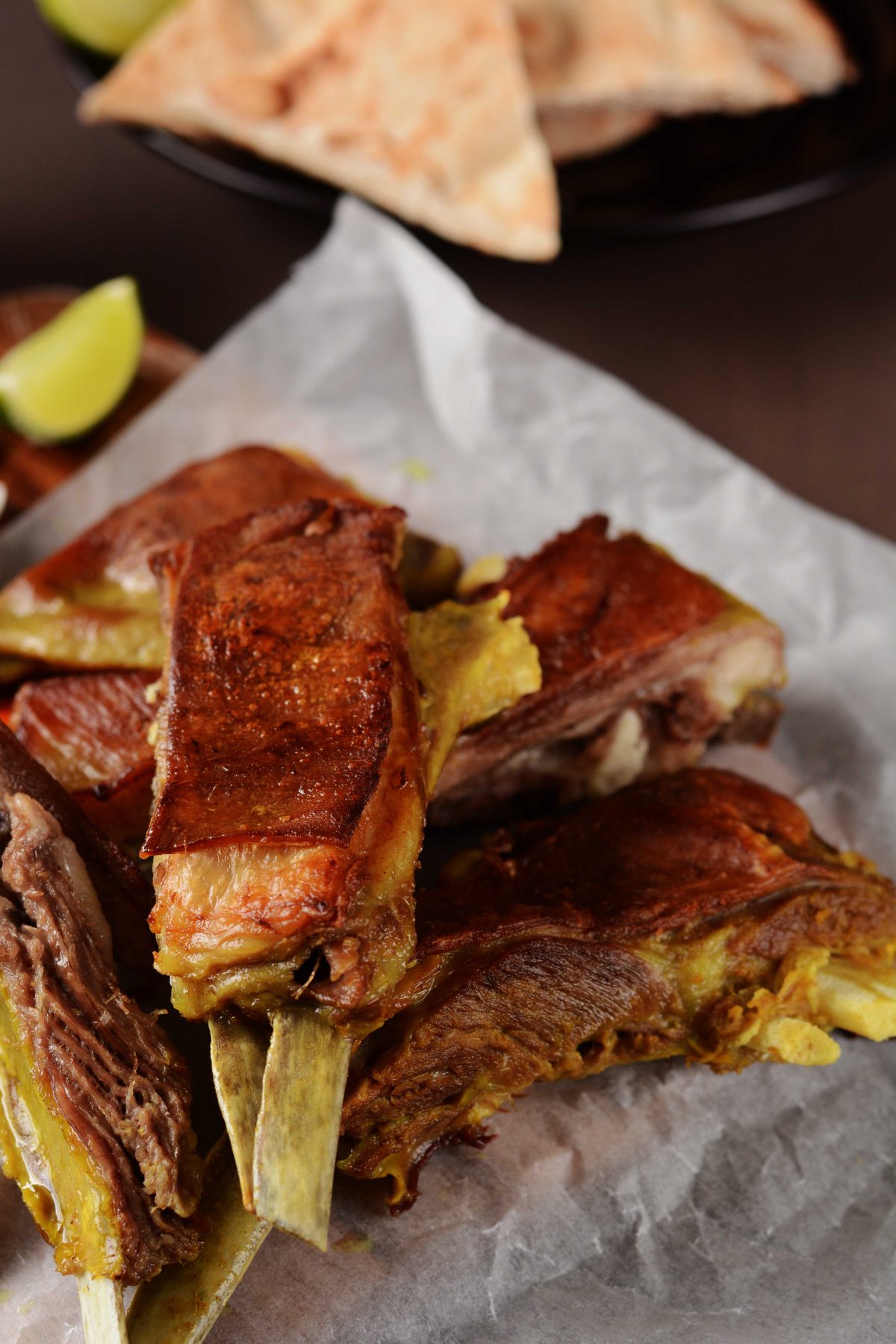 A very traditional preparation of the region, Tabakh Maaz is one of the integral dishes of a wazwan. (You can check out more about wazwan on the Internet or read my mutton roganjosh post). And I learnt this recipe too from my dear friend, Supriya who remains my expert on Kashmiri cuisine. I am a lucky gal indeed!

Making Tabakh Maaz is rather simple but one which takes a bit of time and some good quality ingredients. It is a brilliant example of how spices flavour a fish without adding any heat. The lamb ribs are slow cooked in a broth flavoured with whole spices and then fried off in ghee. It is rich and indulgent, a dish that warms you from within and definitely not one if you are calorie-conscious.

I left the fat layer on the ribs for that extra flavour but you can choose to trim it off. Traditionally it is served as 2-3 ribs together on the bone but I have kept it 1-2. Tabakh Maaz is usually a starter type dish of the wazwan but I had it as the main protein for dinner, so served it with Afghan style bread, cucumber yoghurt dip with sumac and a fresh green salad. One of the ways of adapting a traditional recipe to your family’s needs. 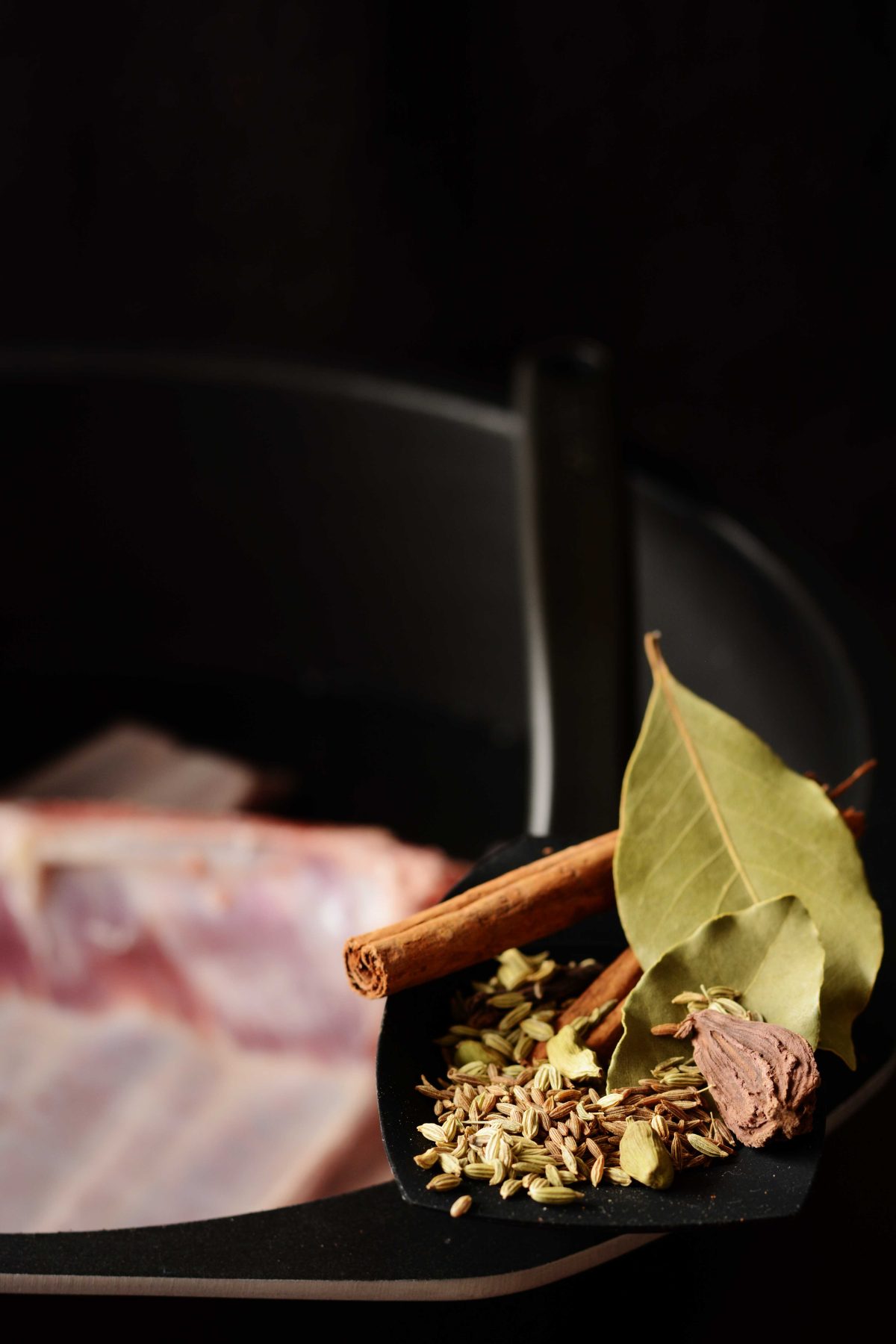 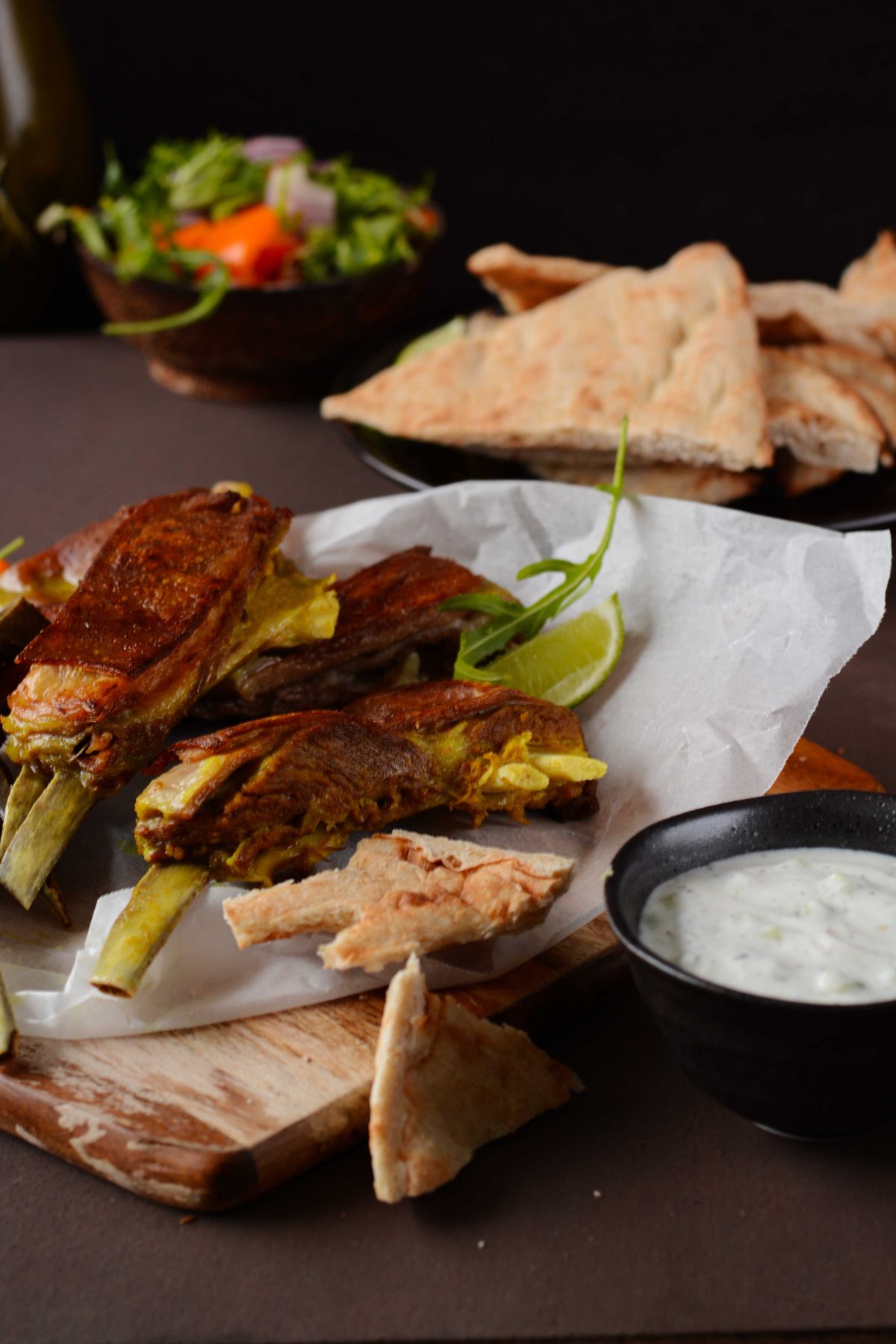 So here we have a very traditional lamb dish from Kashmir – Tabakh Maaz or Kashmiri style Lamb Ribs. 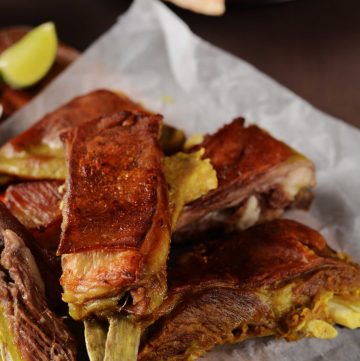 Though the basic recipe for making Tabakh Maaz is the same across the state, there can be variations from region to region. For eg: Kashmiri Pandits soak the ribs in plain yoghurt before frying it off in the ghee. The broth in which the ribs were cooked has a beautiful flavour. It can be strained and use as a stock for making soups and risottos. 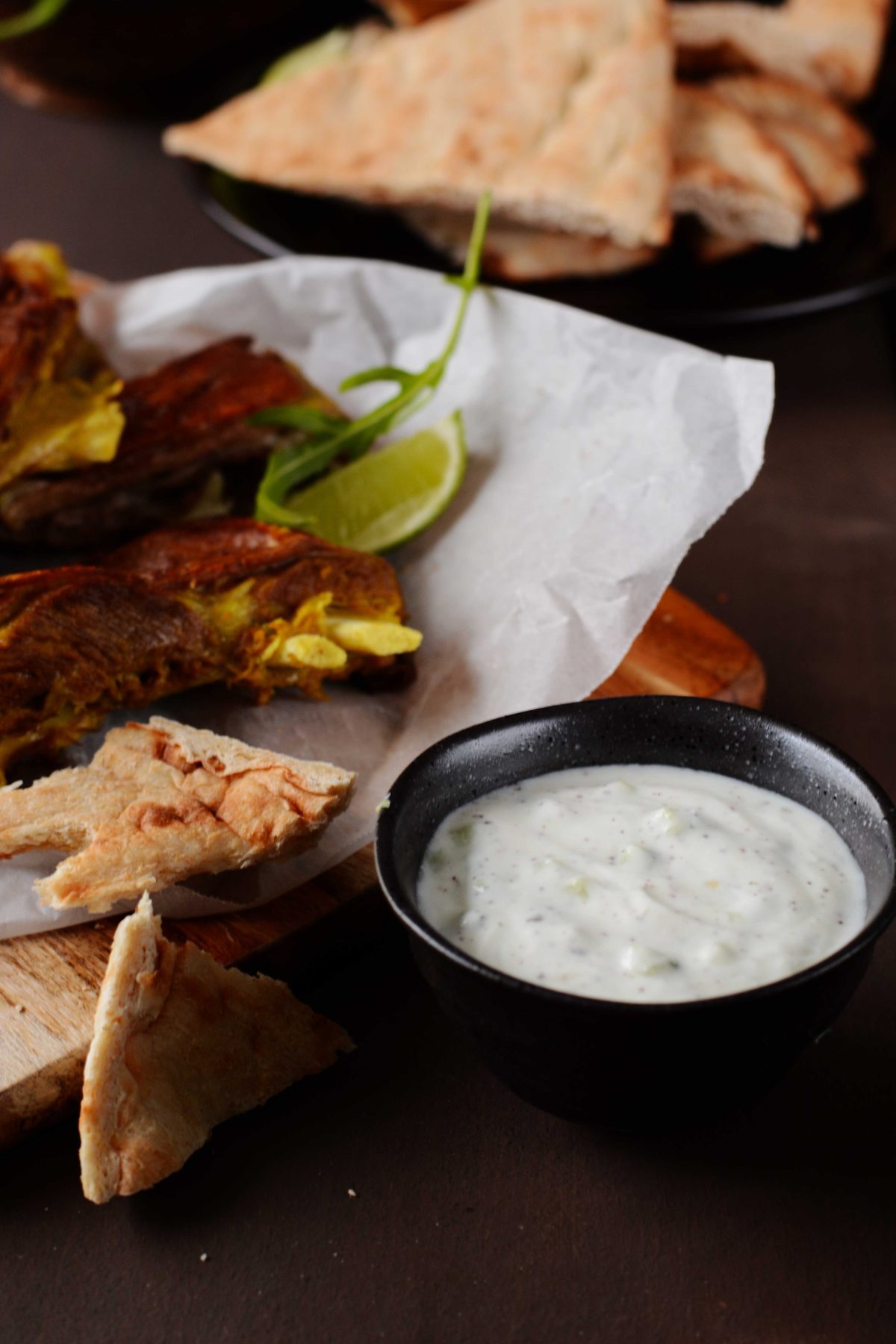 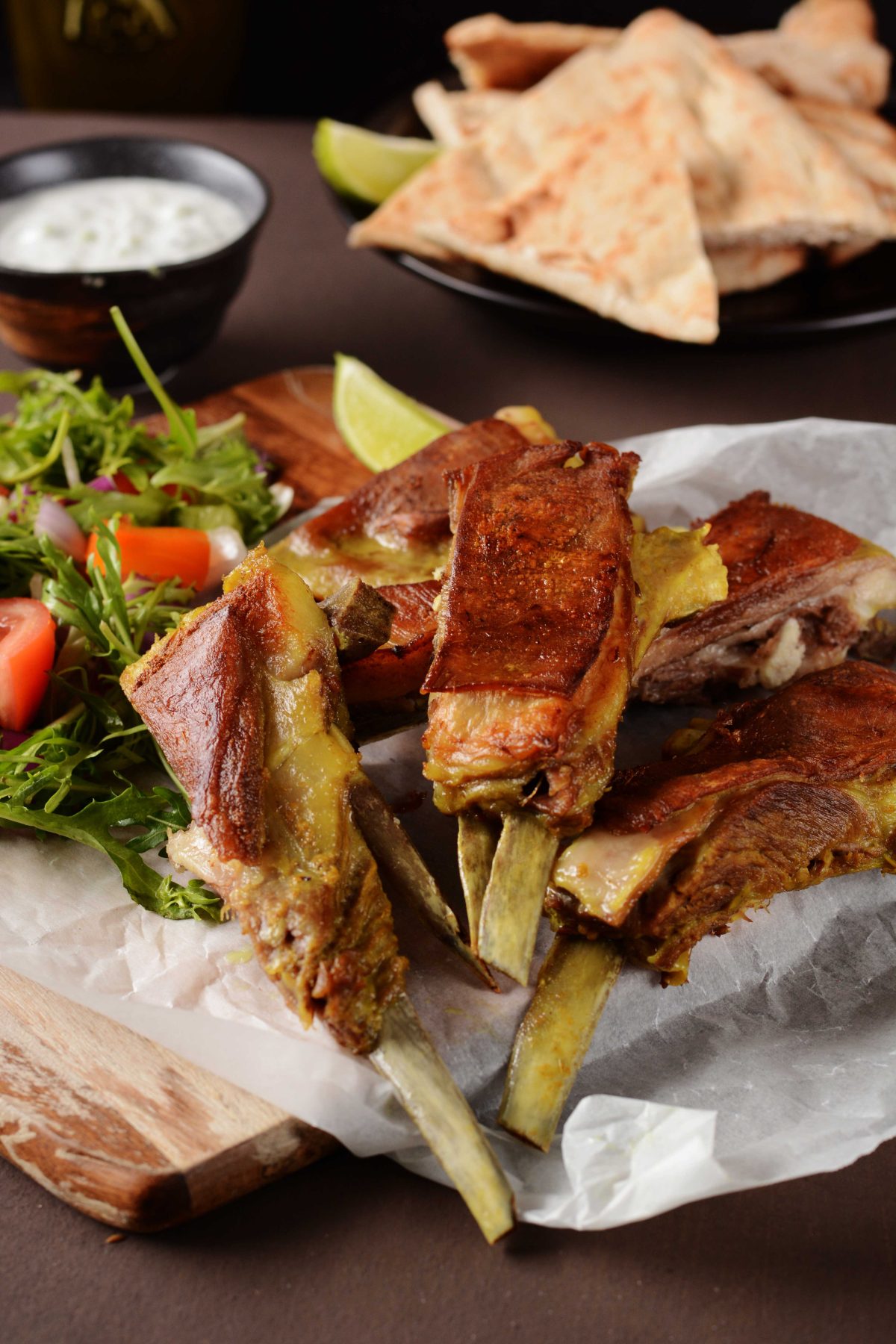