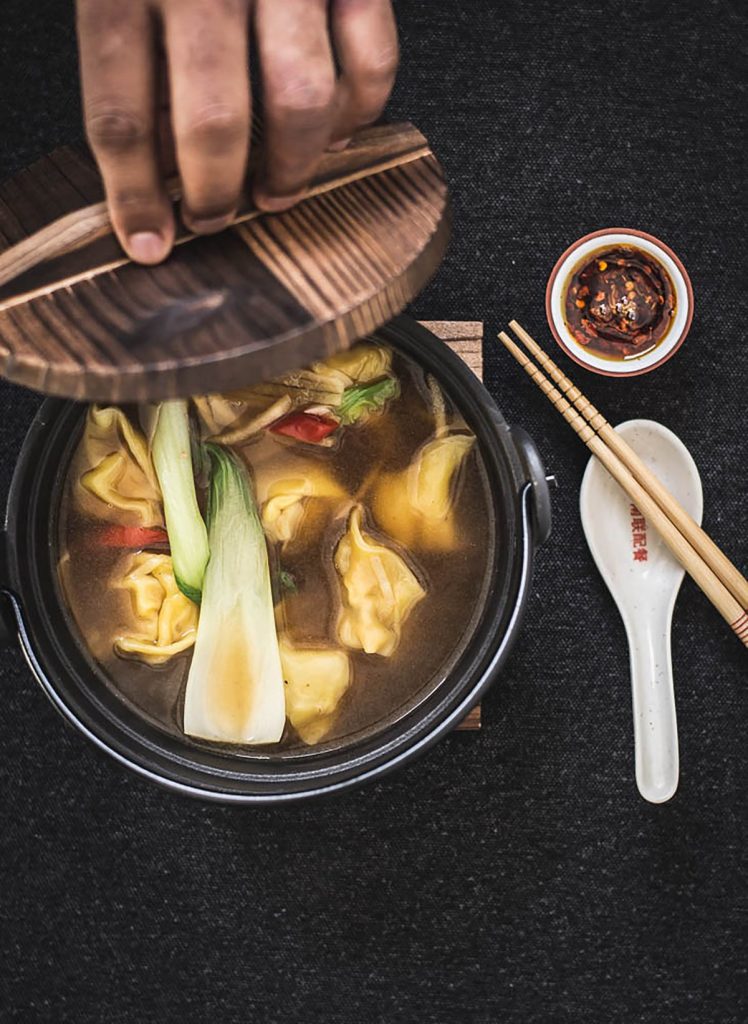 Anthony Bourdain is no more.

Never in my wildest imagination did I think that this is the way I would pay tribute to him on my blog. I have always wanted to write about Bourdain, his books, travels, shows and the stories of food cultures that he bought into our lives. But somehow I never put those thoughts to paper and now this….

It’s been an incredibly hard one to digest.

I have never been so profoundly distressed about someone’s death, especially someone who has not been a part of my personal or real life. He was not family or a friend, just a celebrity I watched on TV, so I couldn’t even fathom why I experienced that numbing ache, that overwhelming sense of sadness that sits heavy in my chest everytime I think of it.

But the truth is that he was one of those rare souls who had touched my life (and I realise so many others too) at a much deeper level.

Yes, Bourdain was all about the food, travel and culture. At least that’s how I identified with his books and shows initially. All the more, because I have always been an advocate for food…without borders, a belief or philosophy on which my blog has been founded too.

But as I got to read and watch him more, I realised that I connect with him so deeply because of our inherent restless, angry souls. His journey has been so different to mine yet somewhere I felt a sense of ‘this guy gets what I feel’ most of the time.

A restlessness to explore the world through food…..he did it through his travels; I do it through this blog. And sometimes that passion can be a burden too, because you are often misunderstood. I remember reading somewhere that most of his friends couldn’t get his relentless need to talk about food and cultures which made conversations difficult at times. And that’s a feeling I totally relate to; people around who simply can’t get my passion or think I am not doing anything worthwhile with my life.

There’s been much discussion about mental health, depression etc…. in the online world after his death but I am not going to talk about it. Not because I don’t think it’s important; because today I want to remember him again only for his love for travel and respect for food and cultures.

And I know these few lines can never completely convey the respect I have for Bourdain’s work….

Let’s get back to today’s recipe.

Dumplings, dimsims, wontons…we are just crazy about these at home. Steamed, pan fried, deep fried, we love it in all forms. But one of my personal favourites especially during winter is the wonton soup.

I order it a lot while eating out at Asian restaurants but this time, I wanted to make it at home. I am not a pro when it comes to shaping wontons so I just followed this video which was really informative.

Not a complicated recipe at all but a tad bit time consuming making the wontons. But it was totally worth it as I made enough to freeze for another comforting weeknight dinner. 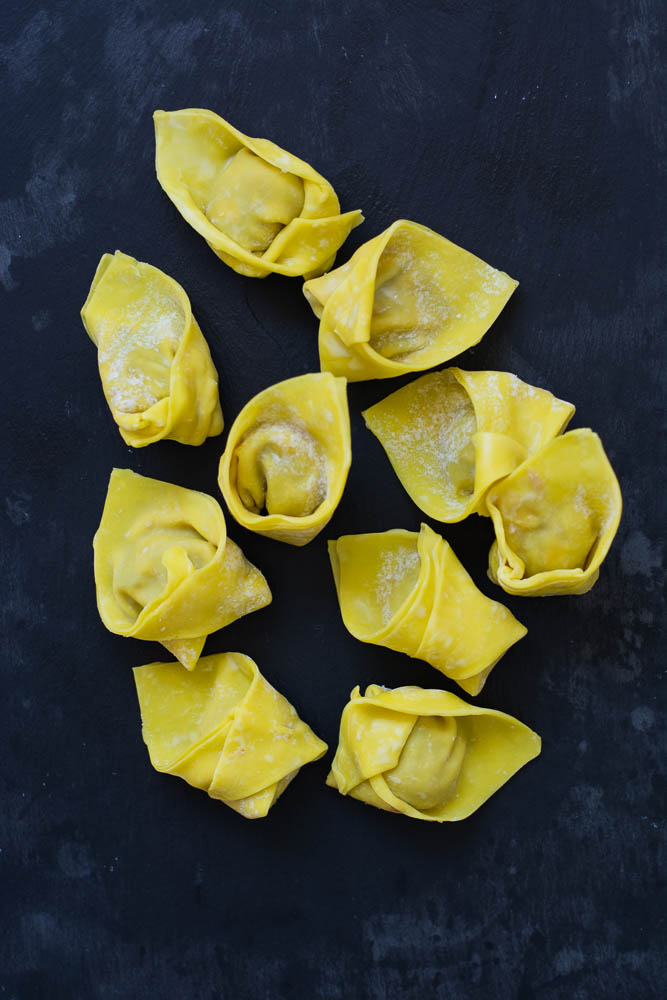 The broth is light and simple but really flavourful and the only way to get that is to use a really good quality stock, store bought or homemade. I added the long red chillies (less heat), plenty of garlic and ginger along with soy and sesame oil to get a well balanced and moreish broth. I could just drink this broth all day long…..

This chicken wonton soup is like a hug in a bowl. It only takes minutes to prepare the broth and the wontons are boiled in the broth itself. I also added some bok choy at the end to finish off. You can add mushrooms, radish or any vegetables/greens of your choice. I wanted it to be all about the wontons, hence kept it simple. 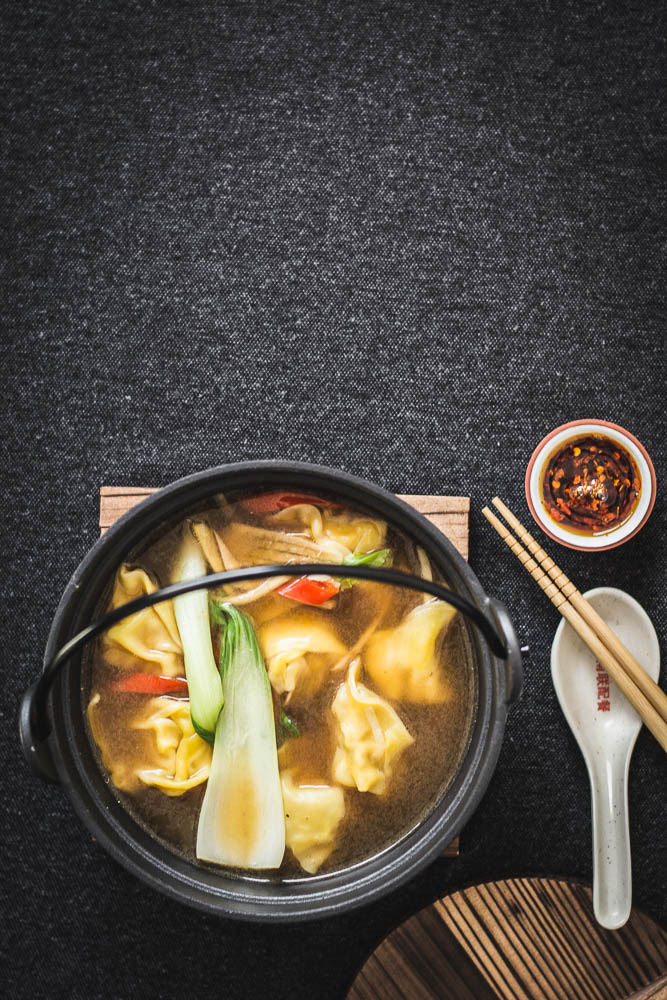 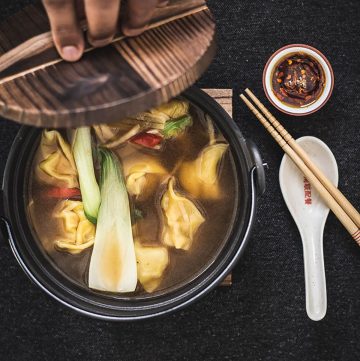 The broth is best made fresh, but if you intend to store it, then remove the ginger slices before doing so or it could turn slightly bitter on sitting. 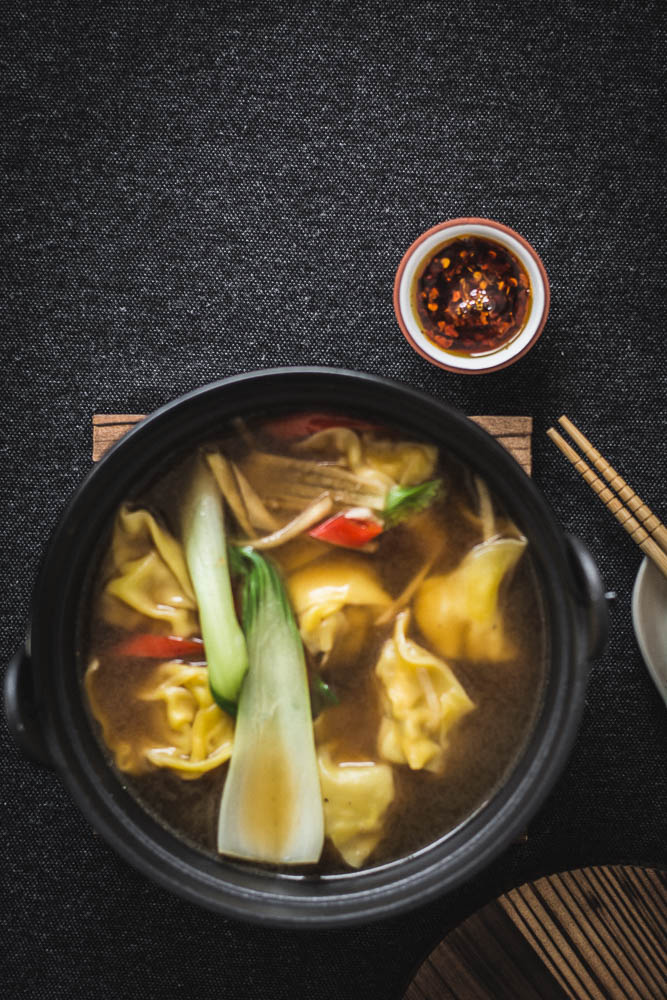