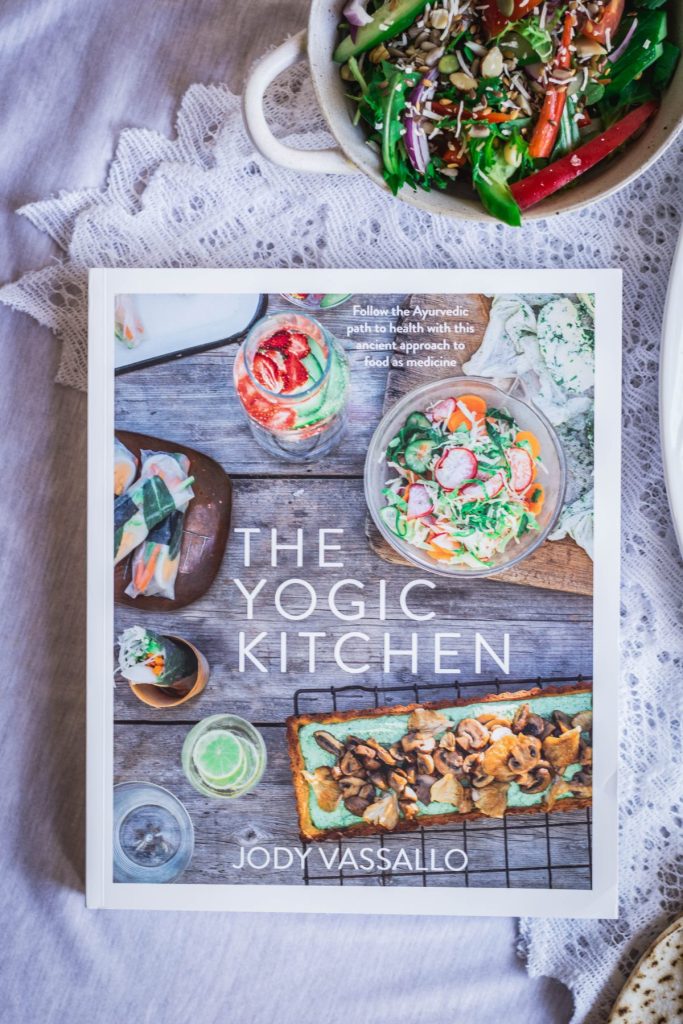 Based on Ayurvedic principles, The Yogic Kitchen explores the philosophy of ‘food is medicine’ at a much deeper and scientific level.

I am a firm believer in the philosophy that ‘Food is Medicine.’

In fact if you talk to me about regular ailments, I am more likely to advise you on dietary and lifestyle changes than go visit a doctor. I am not at all taking away the importance of medical science but I tend to gravitate towards eating right and practicing natural medicine and holistic healing generally.

Jody is a food writer, stylist, yoga teacher and Ayurvedic health coach. I have personally followed her work for a while and she has published and authored several books for Marie Claire, Hachette Livre etc….

The Yogic Kitchen offers us an insight into understanding our body through the Ayurvedic principles of Vata, Pitta and Kapha. Even though I have heard much about these principles, I admit that I didn’t have a proper understanding of it till now. 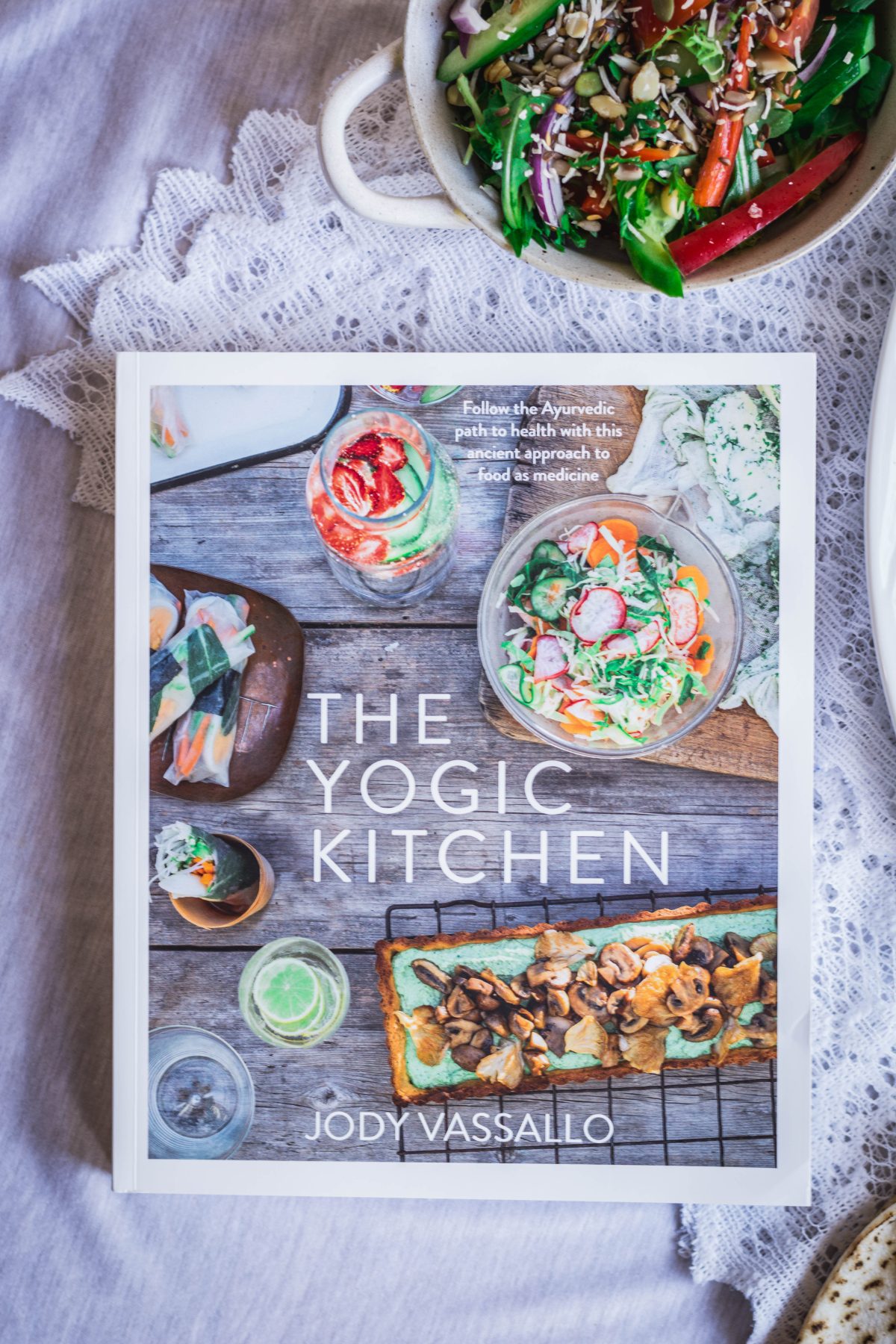 Based on Ayurvedic principles, the book explores the philosophy of ‘food is medicine’ at a much deeper and scientific level. This is not a regular cookbook filled with just recipes and amazing photographs.

The Yogic Kitchen starts with an introduction to Ayurveda; a brief history followed by the scientific principles that form the foundation of this ancient science. According to Ayurveda, the five elements of earth, fire, water, air and space exist inside out bodies as much as outside. These exist in varying degrees and in turn make up the three doshas – Vata, Pitta and Kapha. And these doshas are used to represent our unique body constitution.

So the first thing is to identify which is your dosha.

The book provides an extensive classification of the three doshas based on which you can find out which one do you identify with most. Sometimes you could be a mix of two or even all the three doshas. I found out that I am mostly Vata but with a small percentage of Pitta thrown in.

From yoga to Ayurveda, Jody also explains how she embarked on this journey and the positive changes it has bought about to her health and overall life. Often we tend to forget that our mind and bodies are intertwined and the food we eat has the power to affect not just our physical but our mental self too.

The Yogic Kitchen also provides extensive information on how to balance the doshas, food that are compatible for each dosha, foods and habits to avoid that can cause imbalance etc….

Jody also outlines a variety of herbal teas and medicated milks suitable for the different doshas, spices and herbs that are integral to Ayurvedic cooking. There is also an extensive list of food types that are suitable and not suitable for each dosha provided based on which you can regulate your daily diet.

What I liked best about the recipes outlined in The Yogic Kitchen is the fact that there’s nothing exotic but easy everyday cooking, perhaps with a different mindset. And I also liked the fact that there are options for breakfast, lunch, dinner and desserts.

There’s often a misconception that recipes that focus on Ayurvedic philosophies should be Indian cuisine based but that’s not too true at all. Ayurveda is a science, which can be implemented in all kinds of cooking.

One of the recipes that I tried from this book is the Marinated chicken with Coconut Lime dressing. 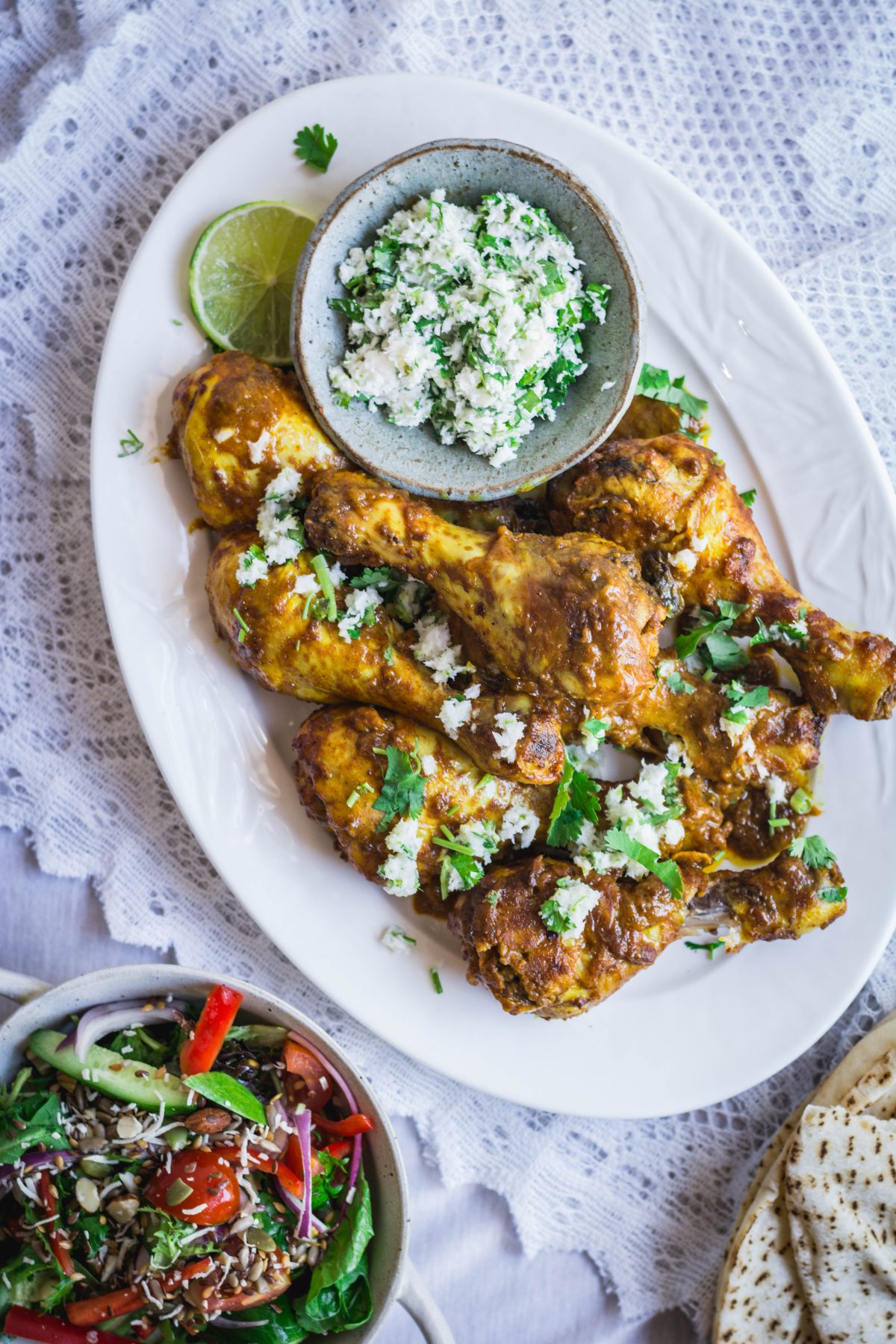 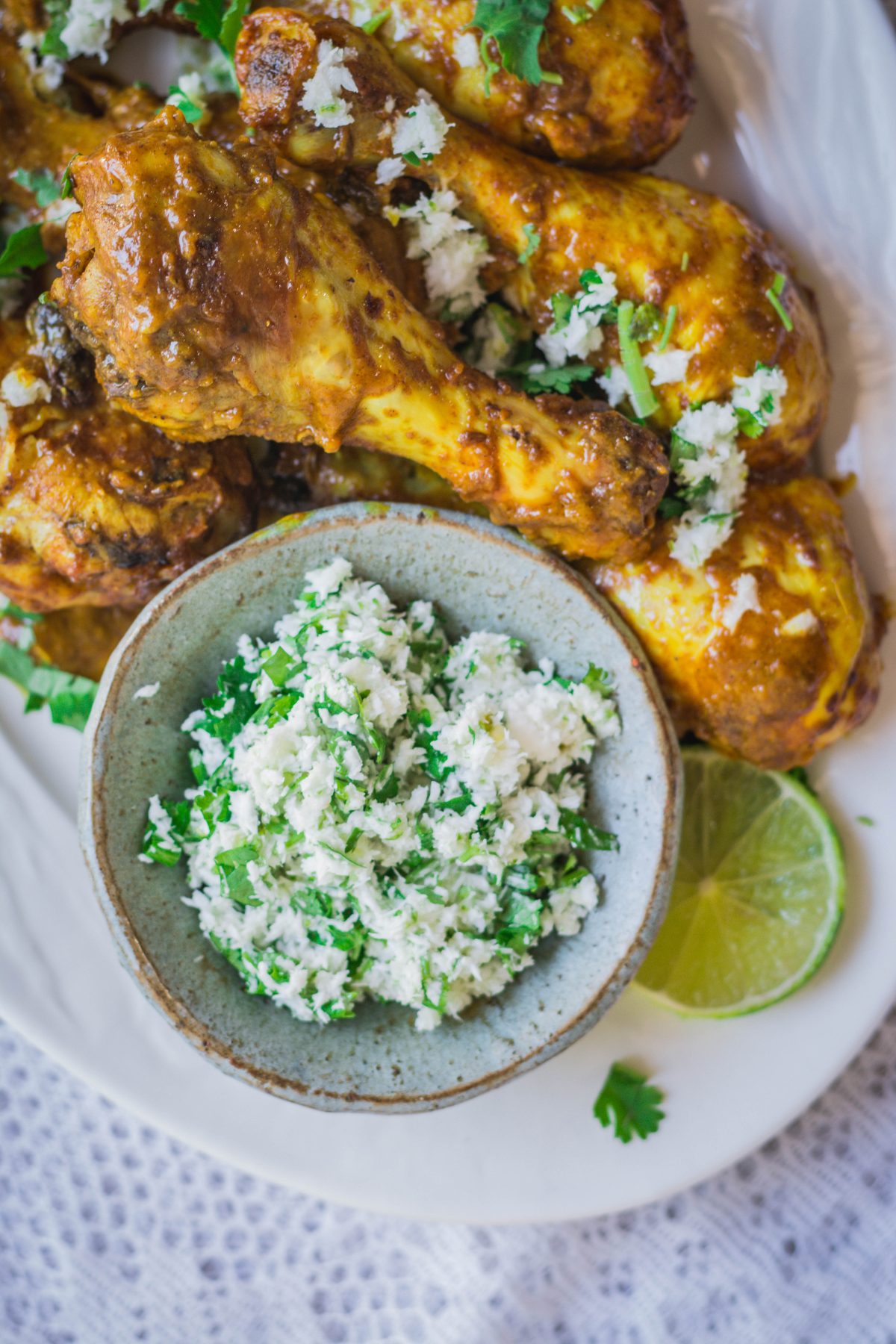 The two things that stood out in this recipe from The Yogic Kitchen are the simplicity and ease of making the dish and the coconut lime dressing. That dressing is just mind-blowing spectacular and some days, I have been making just that for my salads.

It’s a perfect dinner dish for the whole family and one I can prep for ahead of time which means after a work day, dinner is ready with minimal effort and fuss without sacrificing at all on the health or delicious quotient.

I have tweaked the recipe slightly to suit individual preferences, which you should too especially based on the amount of chicken that you would use. While drumsticks are used in this recipe and provides maximum flavour, other cuts of chicken would be good too provided it’s on the bone. And instead of coconut sugar used in the original recipe, I used jaggery since that was available.

So let’s get to the recipe for Marinated Chicken with Coconut Lime dressing. 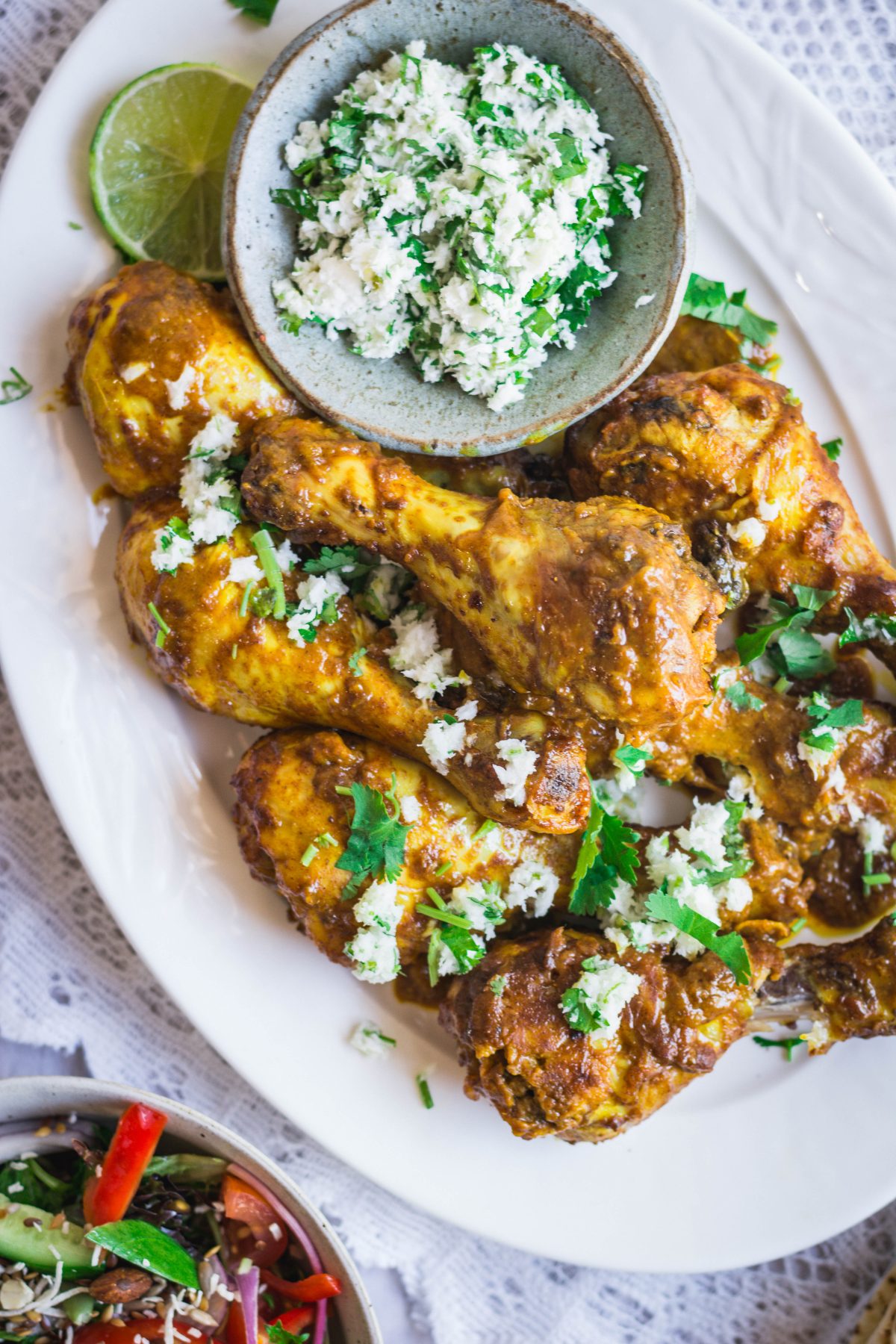 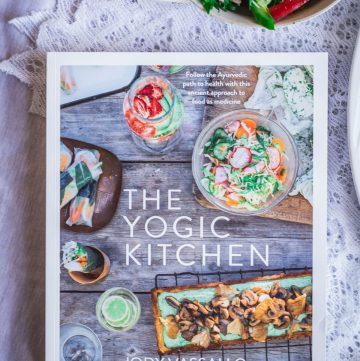